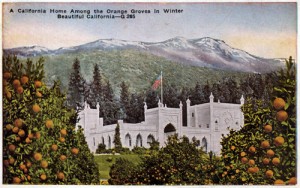 The area was long inhabited by the Tongva people (or “People of the Earth”), who were later renamed the Gabrieleños by the Spanish missionaries, after the nearby Mission San Gabriel Arcángel.

The Brand Library and Park are located in the mansion built by Leslie C Brand in 1904. The design of El Miradero is similar to the East Indian Pavilion built for the 1893 Columbian World Exposition held in Chicago and visited by Brand. The architecture is considered Saracenic, with crenellated arches, bulbous domes and minars combining characteristics of Spanish, Moorish, and Indian styles.  After Brand passed in 1925 the home and lands were bequeathed to the city.  Today the park is a public park and library, providing a wonderful venue for art exhibitions, lectures and concerts, as well as art and craft studios.

Downtown Glendale has seen many changes over it’s history.  Today it is a bustling metro, combining living spaces and retail destinations.