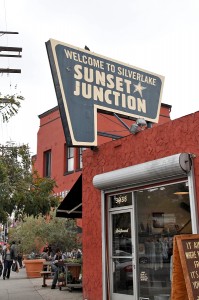 Silver Lake is bordered by Atwater Village to the north, Echo Park to the east, Echo Park’s Historic Filipinotown to the south, Virgil Village to the southwest, East Hollywood to the west and Los Feliz to the northwest. Silver lake blends into Elysian Valley on its eastern edge.  The neighborhood was named for Water Board Commissioner Herman Silver, who was instrumental in the creation of the Silver Lake Reservoir, located within the neighborhood.

Silver Lake’s closeness to Hollywood has meant this community has been featured many times over in many television and movies through the years, including Laurel and Hardy’s The Music Box.  It’s soft rolling hills and easy location has long attracted artists, musician and bohemian, famous residents have included Anais Nin to screen writer Charlie Kaufman, actors Ed Helms to Flea of the Red Hot Chili Peppers.  Since the 1990s, Silver Lake has become the center of the alternative and indie rock scene in Los Angeles. The neighborhood is home to two major street festivals each year: the Silver Lake Jubilee, held in May and the Sunset Junction Street Fair, held in August. The Silver Lake Jubilee, a more recent addition, features live music by local musicians, local artists and community businesses.  Gentrification has intensified in the neighborhood, including the opening of many stylish independent boutiques, coffee shops, fitness studios, and restaurants.