With it’s hilly shady streets, tree-filled canyons, great & convenient location and respected elementary school, Mt. Washington is a lovely community 10 minutes north of downtown and south of Pasadena that many are happy to call home. The views from Mt. Washington include amazing sunsets, the skyline of downtown LA, firework displays from Dodger Stadium and snow covered Mt. Wilson in the winter. 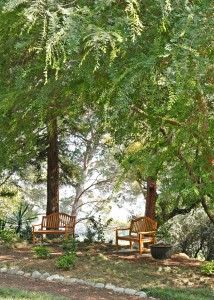 Mt. Washington was once thought of as the country-side between Pasadena and Los Angeles. In 1909 a funicular railway carried weekenders to the top of the hill. The railway operated until January 1919. The original station house, now a residential building, still stands on the corner of Ave 43 and Marmion Way. Visit The Electrical Railway Historical Asso. website for a great history about the railroad, the early days of ‘the Hill’ and some early images from the time.
The destination for many weekend tourists who rode the railway was the Mt. Washington hotel. Advertized as a grand resort hotel with gracious gardens, lush furnishings, fine dining and afternoon tea service, rooms with private baths and a peaceful respite in the country, the hotel opened it’s doors in 1910, operating until 1921. It was eventually purchased by the Self Realization Fellowship. The beautifully maintained grounds are still open to the public.
The Hill continue to quietly grow through the years and today features many fine examples from various architectural eras: beautiful and original Craftsmans, lovely wooded Mid-century homes, funky bungalows inspired by the artistic and bohemian community and new eco-friendly designer Moderns. Homes from Mt. Washington have appeared in dwell, www.la.curbed and featured on architectural tours.